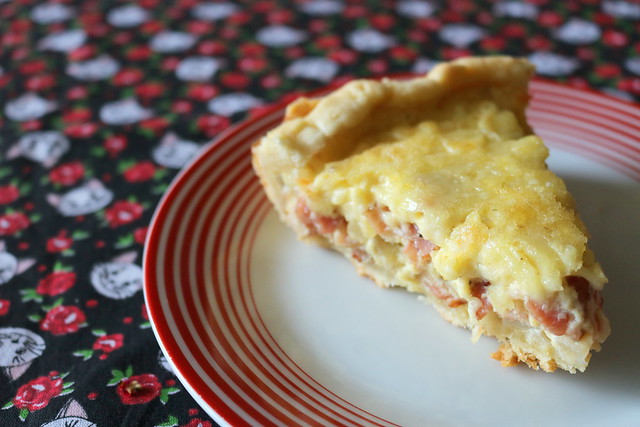 On my last trip to Brasília, my aunt Paula gave me a wonderful gift: Gui Poulain’s Cartas Amarelas! The book is as beautiful as the autograph! Of course, I was dying to try one of the book’s recipes – to start our Pie Tertúlias, I chose his recipe for Quiche Lorraine, one of my favorite savory pies!

I followed the recipe ALMOST to a T – I changed the way to roll out the crust, because I didn’t want to make a mess on my counter! As expected, it was delicious. The best thing is that this pie is equally good hot and at room temperature. This recipe yielded six servings – lunch, dinner, and lunch again! Nobody complained of eating the same thing three meals in a row… 😉 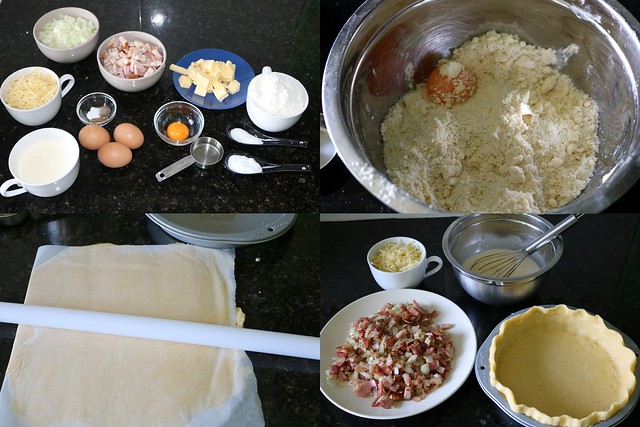 Start by making the crust. Whisk the flour, salt and sugar in a bowl. Add the butter and, with your fingertips or a pastry cutter, mix until you get a coarsely crumbly mixture. Add the yolk and the water and combine just until you can make a ball – don’t knead it, or else it will be too hard! Wrap this ball with some plastic wrap and place it in the fridge for about 20 minutes.

Fry the bacon on low heat. Be patient, so that the bacon grease can render. When it’s all nicely fried, remove SOME of the grease, add the chopped onion and fry it until it’s golden. Set the bacon and onion aside, and try not to snack on it too much until it’s time to assemble the pie.

In a bowl, whisk the eggs with the heavy cream and season with salt, pepper, and nutmeg.

Remove the crust from the fridge. The normal way of rolling out the crust is by dusting your counter with flour. As I didn’t want to clean the flour mess, I cut two sheets of wax paper, placed the crust between the sheets, and rolled it out with a rolling pin. Then, I removed the top layer of paper, placed my 9-inch pie dish upside-down on top of it, flipped everything, and the crust just… fell into place beautifully. (And then, obviously, I removed the second layer of parchment paper)

Now comes the easy part: cover the bottom of the crust with the bacon and onions, then pour the egg and cream mix, and cover everything very well with the grated gruyère!

Bake on a preheated oven for about 40 minutes, give it or take, or until everything is golden brown and firm! You can eat it as soon as it comes out of the oven (which is what we did here) or you can wait and eat it at room temperature (which is also what we did here! 😀 )